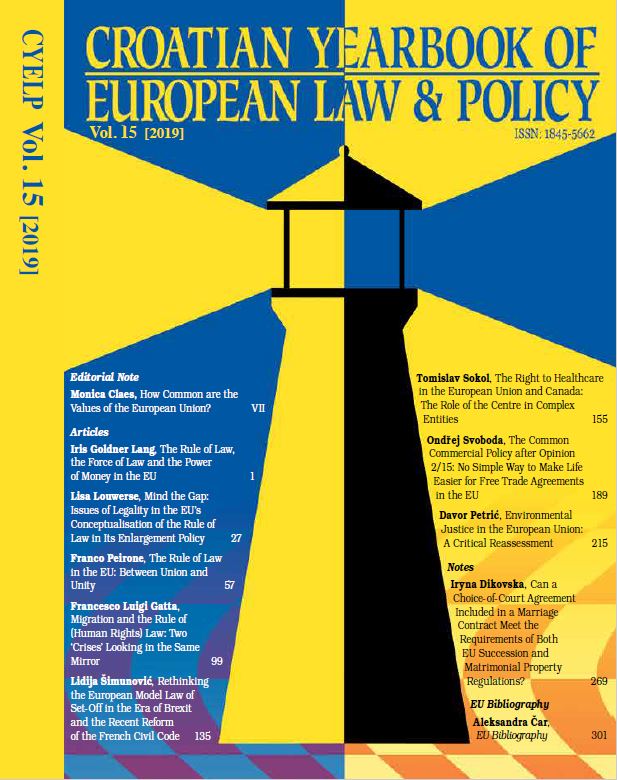 In 2003 the Commission on European Contract Law (hereinafter: CECL) published the Principles of European Contract Law Part III (hereinafter: PECL III) which contained the provisions on EU set-off (hereinafter: EU model law of set-off). These are soft law provisions whose text was the result of the work of the most prominent academics from EU Member States. Considering that the Germanic, Romanic, and English set-off models coexist on the territory of the EU, the EU model law of set-off represents a reconciliation of the different private law traditions and models of set-off. During the 25 years since the adoption of the EU model law of set-off, several significant changes have occurred in the EU, which relate to its set-off law directly and indirectly. The most significant change is certainly the issue of Brexit and the possibility of Great Britain leaving the EU. Furthermore, it is important to note that automatic set-off was abandoned in France, which means it has replaced the Romanic set-off model with the German model. This paper starts with the context in which the European set-off rules were adopted. Then, the author identifies the nomotechnical and practical deficiencies in the EU model law of set-off in the context of the changed circumstances in the EU. The final part of the paper presents propositions for the change of the existing EU model law of set-off, which would help overcome the identified deficiencies and gaps. Consideration is also given to the question of whether, after Brexit and the change in the French set-off rules, the provisions of the EU model law of set-off which were influenced by English and French set-off laws should be removed.

Suggested citation: L Šimunović, ‘Rethinking the European Model Law of SetOff in the Era of Brexit and the Recent Reform of the French Civil Code’ (2019) 15 CYELP 135.